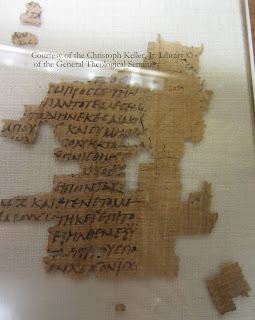 This is a picture of the verso page of P. Oxy 3 403, a Greek papyrus fragment, possibly dating from the late fourth century ce, containing the oldest known fragment of 2 Bar. 12:1-13:2 and 13:11-14:2. The fragment was published by Bernard Grenfell and Arthur Hunt in 1903, but it has generally received far too little attention in scholarship.  The verso page was not reproduced in Grenfell and Hunt’s edition: their list of plates shows only the recto.


In April I spent a wonderful week in the Christoph Keller, Jr. Library at the General Theological Seminary in New York studying this fragment. With the generous help of the library staff and in the friendly atmosphere of the library I had the opportunity to have a really good look at it.


So why is this fragment important?


First, compared to most other manuscripts containing so-called Pseudepigrapha, this fragment, which was found in Oxyrhynchus, is old. Apart from the Dead Sea Scrolls, we seldom come across manuscripts as old as this one in our field.


Second, the Greek text contained in this fragment serves as an important corrective to our general understanding of the transmission of 2 Baruch. Most editors and interpreters of 2 Baruch tend to stick to the assumed complete seventh century Syriac version of the text as the most important witness to the assumed original first or second century version of 2 Baruch, but then important information about the development of the text between the second and the seventh century is lost.


And third, scholars tend to situate the assumed original 2 Baruch in Palestine, and to associate the later circulation of the text with Syria since the text circulated in Syriac. However, like most other manuscripts containing parts or the assumed whole of 2 Baruch, P. Oxy 3 403 was found in Egypt. The story of the life of 2 Baruch in Egypt has never been told (but I am working on it).
If you want to know more, you'll have to wait for my entry on the fragment in the forthcoming Brill volume Textual History of the Bible (eds. Lange/Henze).